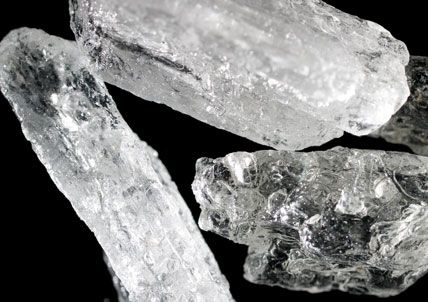 Methamphetamine is also known as meth and is a stimulant that has been found to be very addictive. Studies have shown that meth causes the brain to release three times more dopamine than cocaine does, which often leads to people becoming addicted after just one use. For this reason, many people need professional help to free themselves of a methamphetamine addiction.

People who use methamphetamine experience feelings such as:

Many people experiment with meth in an attempt to get high or to lose weight because it suppresses appetite. However, the majority of people who try meth go on to develop a habit that cannot control.

Methamphetamine is known by a variety of street names. Some of the most common names for this drug are:

Meth comes in a white powder that can be injected, taken by mouth or snorted through the nose. Crystal meth consists of blue colored crystals that are smoked. Just how long the high lasts depends primarily on the mode it was taken. When injected, meth produces the strongest high but it often wears off more quickly than when it is smoked or snorted.

People of all ages and social classes become addicted to meth. It is inexpensive and easily accessible, making it a huge problem in every state in the U.S. If you or someone you love is battling an addiction to meth, there is help available. Contact us today to learn how we can help guide you through the detoxification and rehabilitation process so you can go on with your life.