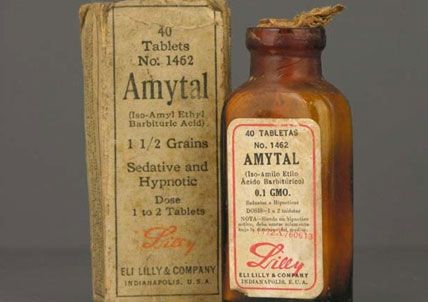 Amytal is a popular brand of amobarbital, which is a barbiturate. Barbiturates sedatives, and they are commonly used to treat sleep disorders and to prepare patients for surgery. Amytal works by calming the central nervous system allowing the patient to fall asleep. Amytal has fallen out of use with most doctors, but some medical professionals still utilize the drug. Amytal is mostly a street drug these days, and it is commonly referred to as blue velvets, downers, red, and redbirds.

Amytal is designated as a Schedule II drug because it has a high risk of abuse and dependence. Amytal is sometimes abused as a sedative. Those that are unable to sleep develop a dependence on the drug. Amytal also produces a buzz for those that use the drug. The buzz is very similar to alcohol. Amytal is extremely strong, so any unprescribed use is considered abuse.

Amytal may seem fairly harmless because it is mostly used to put people to sleep, but it is actually fairly dangerous. The drug can depress brain function causing the user to stop breathing. This can cause a coma or even death. To prevent unnecessary deaths, it is vital that Amytal addiction is spotted early.

Addiction to Amytal can happen suddenly and usually, the user will not notice the issue. The only legal way to get Amytal is through a doctor-supervised injection, but of course, people find a way. One common sign of Amytal addiction is "doctor shopping". An addict will go to numerous physicians to access the drug the want. Other addicts will seek out street dealers to find the drug. If you are noticing yourself or a friend going through excessive measures to get Amytal, then you should tell someone quickly. Amytal is very serious and you must take action immediately.

Amytal abuse is extremely dangerous, and the statistics tell a scary story. Ten percent of people that overdose on barbiturates will die. People become addicted at a young age, with 9% percent of high schoolers developing an addiction to barbiturates. It often goes overlooked, but barbiturate addiction is serious business.

Treatment for Amytal addiction is a long process, but it usually starts with a doctor-administered detox. All traces of the drug must be eliminated from the addict's system before any real recovery can start. This detox also prevents negative side effects. Recovering addicts must allow themselves necessary time to come back or they will relapse. After a period of inpatient recovery, must former addicts visit support groups to keep them on the right track.

If you or someone you know is addicted to Amytal, now is the time to act. Find a treatment specialist in your area and start a detox. Acting now may save a life!